Every time we've taken on a new technology (see the figures below) everyone has enjoyed an increase in financial rewards. 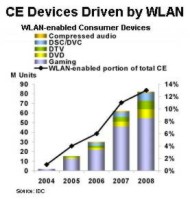 That's why TV production libraries scrounge through the dusty stacks. They have discovered there is money to be made their old content. People actually want to buy stuff like The Thin Man, Johnny Carson Show, Petticoat Junction, Beverly Hillbillies and a treasure trove of intellectual and mindless series.

But why think you "might be wrong? Lawyers and lobbyists need to be gainfully employed too!

If they would examine the technology successes closely they will see that RealNetworks, iTunes, SonicWallpaper and other sites do meet the consumer's needs…when the prices are right.

More importantly, they would find that their distribution costs go down…dramatically!!!!

Speaking of buying discs, we found Robert Capps' article in the April issue of Wired magazine to be "interesting." Ignoring the bipolar position of the content owners, his contention is that discs - of any flavor - are dead and everything will simply come to us over the network. The conclusion comes from the fact that new, more efficient codecs are being developed. These will pack and unpack our Hi-Def video. In addition, bandwidth will shortly be everywhere.

Similar statements were made more than 10 years ago when PCs and networks became ubiquitous in business. Viola…the concept of the paperless office was born.

Just don't tell that to HP or Epson because they make truckloads of money on inkjet cartridges.

It's interesting to note a few facts that Mr. Capps overlooked:

Even though less than 50% of the U.S. homes have Internet connectivity (of any capacity) IPTV is just trying to get off the ground but content owners are throwing up roadblocks that could cause it to take 10+ years before it is widely available MPAA and RIAA have a begrudging acceptance of disc-based content but they have made it abundantly clear that they have no intention of allowing through-the-air access to their "stuff" until they can be 100% certain all of us pirates won't be able to rip off "their" content

Japan which sells almost nothing but Hi-Def TVs and hundreds of thousands of expensive Blue-ray recorders still sells millions of content CDs and DVDs each year because they are inexpensive. Korea, which has cable and IPTV available, does the same. Worldwide more than 100 million DVD burners and recorders are in use and those numbers are projected to continue to increase faster than Blue technology recorders well into 2015 (see graph at right).

Second is human nature. Drive down any street on a weekend and peek into the garages that have open doors. Often they are filled with so much "stuff" the car won't fit. Look at your PC's hard drive. You're probably about ready for one of those Hitachi 1GB "upgrades." Look at your VHS, CD, DVD, CD-RW and DVDRW libraries.

The minute we set down roots, we accumulate "stuff."

The final arrow in Mr. Capp's balloon is that it will be a helluva long time before MPAA members and other content providers are convinced they can trust you with "their" content.

Once they do, they will probably find out that it is much like the paperless office…you'll buy more of their stuff and make it your stuff! Somehow we don't see Verbatim, the world's leading writable CD and DVD producer, the other disc makers and the hardware folks disappearing even in the distant future.