And So It Begins... FCC Allows MPAA to Control Your TV 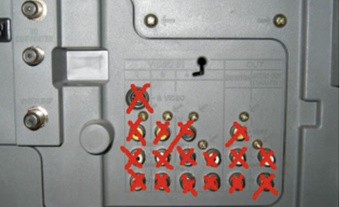 There is nothing wrong with your television, do not attempt to adjust the pictue...

After years of wrangling with regulators at the FCC to allow retroactive disabling of analog HDTV outputs, the MPAA was finally able to convince the agency to allow them to SOC it to consumers.

In violation of commonly accepted consumer rights, the FCC will now let Hollywood use Selectable Output Control (SOC) to retroactively disable any SDTV, HDTV, or other device that depends upon analog connections to view video over a red herring argument about preventing piracy.  You see everyone is after pirating that sweet analog video coming through the analog hole, and somehow, plugging it will magically stop piracy.  You see, analog video comes through the analog hole without all that fancy digital DRM like CSS, AACS, or BD+ that no one in the whole wide world knows how to bypass or defeat.

I somehow doubt that plugging the analog hole is the end piracy, seeing as how movies are on the Internet before they even hit the theaters these days.

Worst of all, FCC is spinning this as a public good:

We believe that providing consumers with the option to view films in their homes shortly after those films are released in theaters will serve the public interest. (Wired Magazine)

With over 11 million analog only HDTVs sold to consumers, and the nearly countless number of analog SDTVs still in service and not in the landfill, it seems like the FCC position on SOC may be just a bit disingenuous.

According to Public Knowledge, one of the public interest groups strongly opposed to allowing SOC, the following consumers are affected by SOC and would have to buy new equipment or remain affected:

For now, the wedge allowed by the FCC is for a 90 day window on new release movies on pay TV or until the DVD is released, but the wedge is in none the less.

The goal for Hollywood is another release window in between the theater and the DVD/BD release to milk consumers for PPV dollars.  The leverage used on the FCC: Hollywood said that they could not release titles for home viewing without SOC, thus preventing consumers form seeing movies in the convenience of their homes before the DVD/BD is out.  Of course, movies in any form can be released at any time, but piracy is an ever-elusive bogeyman that haunts Hollywood executives and makes for a good scare story told to gullible politicians and bureaucrats alike as they are urged to erode civil rights.

Or is that complicit, rather than gullible.  Considering how many former Hollywood lawyers were appointed to the DOJ and pushing to turn the agency into publicly paid, private copyright cops, cheered on by the Vice President from private meetings with Hollywood executives in the absence of any public advocacy groups.  Most copyright infringement, it is not theft, is a civil matter, not criminal and the DOJ should have better things to do, like thwart Identity Theft, rather than Intellectual Property Infringement, but it seems priorities are a bit mixed up, as a recent report shows that Identity Theft appears to no longer be a priority.

Next up, everyone else with some content to put on the TV will be asking for a waiver.  There has already been talk, before the FCC allowed even allowed SOC for the MPAA, concerning whether SOC would be extended to sports.  With the precedent set by the MPAA waiver, it is effectively guaranteed that anyone who puts something on TV will want SOC control and the FCC will have a hard time justifying a refusal to do so.  So much for the legal precedent of the Betamax decision that allows personal copying and time shifting, the FCC, with whom protecting communication access in the name of the public is entrusted, is now allowing individual industries the ability to cripple communication devices for profit.

Seems like the FTC should be in there somewhere pointing out the illegality of disabling lawfully purchased consumer goods after the fact to further private industry business interests.  The revocation of the prohibition on SOC that was supported by the previous FCC effectively allows a third party, the MPAA or anyone else who get a waiver, to void fitness for a particular purpose of any analog video device.

I am not one for pushing lawsuits, but perhaps a nice class action lawsuit against the FCC, the MPAA, and anyone else asking for SOC would be an appropriate consumer response.  Sony is already facing one for removing functionality from the PS3 after the fact through the latest forced firmware upgrade that removes the option to run another operating system.  Or perhaps a mass filing of complaints with other consumer protection agencies such as the FTC or various state Attorney Generals on consumer protection grounds to goad them into action.

Personally, I do not watch much video through analog means, but allowing business interests to disable functionality in lawfully purchased consumer goods after they are purchased is in principle, very, very wrong.  Welcome to the slippery slope.

-pat
GO-NAD! posts on May 14, 2010 11:17
It's ironic that as technology progresses, allowing more and more convenience to be incorporated into electronics and media, that industry insists on making it more and more inconvenient to enjoy those very same products.
TLS Guy posts on May 13, 2010 22:30

admin, post: 717305
After years of wrangling with regulators at the FCC to allow retroactive disabling of analog HDTV outputs, the MPAA was finally able to convince the agency to allow them to SOC it to consumers. In violation of commonly accepted consumer rights, the FCC will now let Hollywood use Selectable Output Control (SOC) to retroactively disable any SDTV, HDTV, or other device that depends upon analog connections to view video over a red herring argument about preventing piracy.


Discuss “And So It Begins… FCC Allows MPAA to Control Your TV” here. Read the article.

We need a concerted public push to ban all forms of DRM. Let the MPAA say they will never issue a movie for viewing outside the theater. Of course they will, and they will find they make more money from sales.

We need consumers and manufacturers to call the bluff of this perfectly vile Hollywood crowd.
just-some-guy posts on May 13, 2010 22:22
can you imagine what this country would/will be like in 50 years ?

a coin slot on your toilet.
a toll booth at the end of your driveway.
a credit card reader on your tv.
etc, etc, etc ….

well, that is, IF you could afford any of those things ….
Post Reply