Dolby Atmos Coming to Theaters Near You 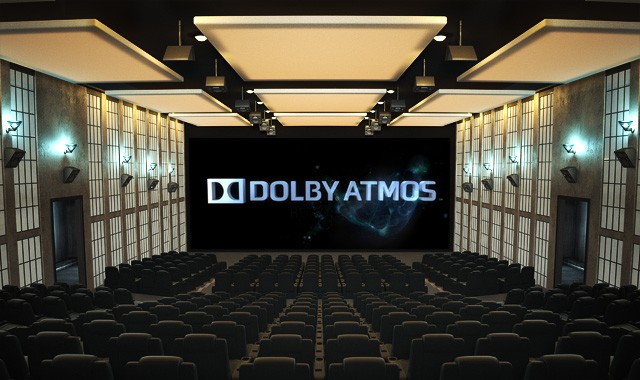 The new Dolby Atmos platform one-ups the competition by adding a new frontier in sound - the upper hemisphere. Theaters featuring Dolby’s new Atmos technology will expand sound into discrete channels above the audience with a system that uses 64 speakers to completely envelop the audience.

Dolby’s new technology could be just the next strike in a war of escalation reminiscent of razor blade ads that once one-upped each other with more blades for an even closer shave. Dolby Atmos, with 64 speakers, can create a ridiculously lifelike sonic experience with localized sound in front, beside, behind and now on top of the audience. Atmos will envelop you in such an extreme sonic experience the ticket-booth will have to hand out diapers with their 3D glasses.

Atmos was introduced at Ceasar’s Palace, Las Vegas at CinemaCon the convention that bills itself as the eyes and ears of the worldwide motion picture industry. Dolby presented a hybrid system of mixing sound as dynamic objects designed to envelop the audience. Atmos employs what it calls adaptive rendering to ensure that theatrical playback is as close as possible to soundtrack’s demands – no matter the environment or even the speaker configuration during playback.

“Dolby Atmos is our most significant innovation in years and represents the future for entertainment sound in cinema,” said Kevin Yeaman, President and Chief Executive Officer, Dolby Laboratories. “We have leveraged our deep insights into how people hear and experience sound to empower filmmakers, studios, and exhibitors with new technology that transforms storytelling.”

The new format was for now at least, designed for movie theaters only and bumps up the number of discrete channels from 5.1 or 7.1 to potentially over 64 speakers. According to Dolby, Atmos brings the ability to localize or move sonic objects throughout the audience environment regardless of size, meaning the format can be adapted to smaller viewing areas, like budget theaters with fewer speakers. And yes, Dolby has stated that it plans on bringing Atmos to the consumer.

The new format already has its first major film premiere in Brave, the digital animation adventure film by Disney – Pixar is set to launch June 22 in Dolby Atmos at equipped theaters. If you’re lucky enough to live near one of just 15 movie theaters worldwide that will be setup to take advantage of the digital audio format for Brave’s theatrical run you’ll be treated to the work Gary Rydstrom, seven-time Oscar winning Sound Designer. Rydstrom is responsible for some of the most memorable sound in movies, his credits feature Saving Private Ryan, Finding Nemo, Minority Report and who can forget his work in Terminator 2: Judgment Day, a movie we all saw with our ears as much as our eyes.

Peter Jackson, one of the first directors to embrace all-digital video, is known for pushing the tech envelope in his films. Dolby Atmos is set to come down to New Zealand to pitch its new audio format to Jackson for use with his upcoming movie The Hobbit. Jackson is considering the new audio format partly because The Hobbit is already going to break new ground in video. The film is being shot in 3D and for the first time in a major film it will be shot at 48 frames per-second.

“Our particular postproduction schedule is reasonably tight (but) three dimensional sound would be fantastic. If we can do it I would be pretty keen.” Jackson said.

Atmos for the home

Dolby has said that it envisions a long-term lifecycle of the Atmos experience that will bring the digital 3-dimensional audio format not only to home theater systems but also with a version of the technology designed for PCs, tablet and mobile devices.

But how likely is an upper hemisphere to be adopted in the home? Our own Audioholic, Gene DellaSala says that he has been implementing in-ceiling surround back speakers for years with great success. Overhead speakers are sometimes the only option for installing surrounds, especially in sunny Florida where open interiors are a practical option that often present no back wall for speaker installations.

An Audioholic and engineer for a major speaker manufacturer (identity to remain anonymous for professional consideration) who was in attendance when Dolby unveiled Atmos at CinemaCon, had this to say about his experience:

“I thought the Dolby Atmos demo was impressive… I had prime seating in the theater. The standard theater speaker system had been modified for the demonstration… There were 2 rows of 9 (18 total) speakers mounted on the ceiling and all of the surrounds were discretely amplified.  The sense of immersion in the surround sound field was definitely heightened. Dolby did several A/B comparisons using movie and music clips which were quite effective at showing how effective Atmos was at extending and defining the sound field.“

Theater chains always want to provide moviegoers with an experience they can’t get at home and Dolby says Atmos is the only platform that can provide the dynamics that create the sonic equivalent of 3D – perfect for today’s movie-going experience. Although the upgrade could cost theaters anywhere from $10,000 to $30,000, Dolby expects to see widespread adoption in 2013.

By the time Atmos processing makes it into consumer-grade home theater receivers we may have already learned what DTS will do to one-up Dolby. Just like the shaver companies, perhaps DTS will promise even more speakers for more discrete channels of sound.

But the biggest hurdle for Atmos and its competition in the home market will be selling people on even more speakers, cables, wires and associated installations. It’s a steep price to pay for more blades and even closer shave.

Dolby reveals the future of cinematic sound in Dolby Atmos demo | The Verge
cpp posts on June 08, 2012 15:17
I think movie theaters are doomed. Why? Because the younger generation doesn't seem overly concerned about such niceties as pixel count, screen size, or color gamut. Many seem perfectly content to watch a film on a laptop, an iPad, or even a diminutive iPhone. To me, that's like listening to Tchaikovsky on a crystal set, but Gen Y would argue that the value is in the art, not the technology
its phillip posts on June 08, 2012 14:30
They just built a Cinemark XD near my house (opens today). I wish they installed an Atmos system there - I don't wanna go all the way to Plano to check it out
mtrycrafts posts on June 08, 2012 14:07
Well, you will have to take a short trip into Toronto and tell us all about that new experience as I will have a long wait to hear it.
Post Reply