Blu-ray Disc... Emerging Format or Hurry Up and Wait? 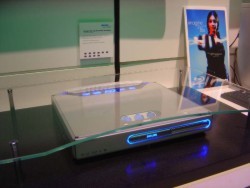 We know people are waiting for the next great thing in storage and too many people have been convinced that:
a) it's Blu-ray Disc
b) it will be here shortly, and
c) it's going to give you huge/cheap/high-quality video storage.

Blue ray technology (either BD or HD) is good. It will give you storage capacity of 25GB single layer, 50GB double layer. Folks in Japan and other areas of the Pacific Basin have been buying BD recorders for about two years and have not only paid dearly for the hardware but also the cartridge discs.

Just don't visit blu-raydisc.com for a listing of units you can buy anywhere else.

Lots of folks say that the two technology approach camps are holding things up from getting burners, recorders and media to the market and making it hugely successful. But that runs counter to logic since the organizations are working real hard to see how they can make the units - profitably - for sale under $1,000 and to make media that is priced under $35 per disc.

The word that Sony and Toshiba are now in discussions to develop one standard has been heralded as the definitive breakthrough and we can expect a "new" solution shortly. Of course they want a single standard as long as it incorporates "their" royalty-producing technology.

While all of those with vested interests have joined in the discussions, Matsushita (better known as Panasonic) has said they'll let the key parties hammer out the details. Of course Nakamura-San the company's president was quick to add …"We cannot compromise on the point of the 0.1 mm [cover layer]."

Want to guess whose technology revenue stream that is?

Hollywood wants to cut its "piracy" losses. New disc technology will mean people will have to throw out existing players and recorders. Obviously the technology revenue stream is a lot more than an accounting rounding error.

By upgrading DVDs with HiDef content and interactive features it's something they all hope you just gotta have!

Engineers on both sides of the aisle have spent years on their formats and compromising their technical children will be a hard pill to swallow. Each side has convinced him/herself that they are the best solution. The two formats' discs are made very differently. HD DVDs put the data layer in the middle. Blu-ray discs store data close to the surface and add a thin protective coating on the top.

A true compromise will send the engineers would be sent back to the drawing board. It will add years to the timetable.

Merging the formats will mean one side's format is adopted, with a few compensating bones thrown in to satisfy the losers. That will require a helluva sales/spin job!!!

Common logic says that with the manufacturers and content owners involved it will take four to six months to hammer out the details of the compromise. Then they have to develop, verify, test and fine-tune the specs. Then the firms have to develop the prototype hardware, firmware and media so we're really looking at 2008 before we see serious new products at retail.