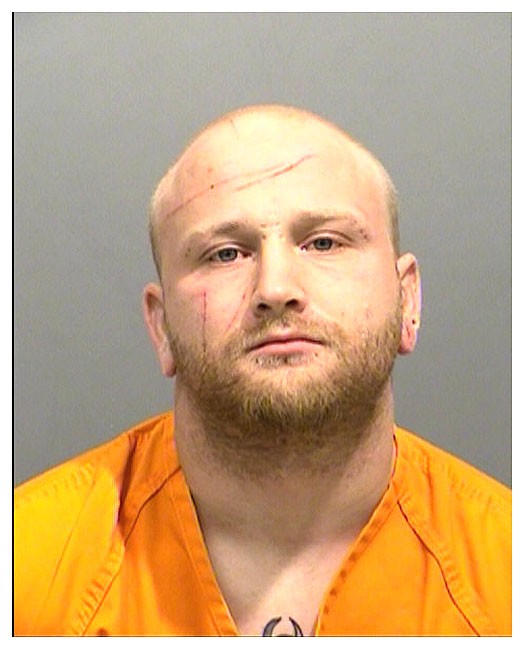 According to an article at The Smoking Gun, Aaron Siebers, a 27-year-old Blockbuster employee, decided that it would be better to stab himself than go work at Blockbuster Video. While in principle I can sympathize, it was a little odd to see someone actually carry out something like this in real life. Aaron was apparently skateboarding Wednesday afternoon when he fell and ripped his work pants. Since he knew he would be "written up" by Blockbuster for having ripped pants (or for wearing non-standard pants), he decided to stab himself in the leg and show up claiming he had been attacked by three Hispanic males. Smooth move, Ex-lax.

I suppose calling in sick was simply out of the question...

But that wasn't the end. Police were called and Siebers, not wanting to back out just yet, told cops he was assaulted as he walked toward the Blockbuster, had a deep stab wound in one leg and several other minor cuts on his face and stomach. Unfortunately for Aaron (but fortunate for the rest of us) assault with a deadly weapon is a rather serious offense, and police quickly went to work. When surveillance video from outside a Target store (where this nimrod claimed the attack occurred) was reviewed, no such attack could be found. Confronted by cops, Siebers admitted that he had stabbed himself. He confessed about his skateboarding accident, the resulting ripped pants, and how "he did not want to lose his job so he stabbed himself in the leg." Now Siebers has been named in a criminal complaint charging him with filing a false report and obstructing police, both misdemeanors. Here's a quick over view of the Do's and Don'ts of accepted employee behavior when dealing with an issue at work involving discipline, clothing or other potential disciplinary action:

What Not to Do

What We Recommend to Do

And most importantly... If you don't like your job; before you actually stab yourself, try quitting.

I was at the Northridge Appleby's the night before it happened. What a turd.
Warpdrv posts on November 06, 2009 14:20

We had a guy stab his wife multiple times, killing her and he cut himself with a pocket knife, then he told the police and the news that they were attacked by a couple of black guys. He said one of the guys lost his hat in the incident and it was found that he bought it from some kid in a mall a few days before. He was convicted of killing her, sentenced to life without parole and was killed in the same incident as Jeffrey Dahmer.

His accusation will be remembered and if he spends any time in jail or prison, he'll get what-fer.

Jesse Anderson - He was a customer at my business, sick F&%k…. got what he deserved…

…We'd he have to get Hispanics involved in his feigned attack? Sheesh.
Electone posts on November 06, 2009 11:59
I feel like stabbing myself every time I walk into a Blockbuster store and have to deal with any of the staff…
cwall99 posts on November 06, 2009 11:18
This guy sounds as bright as those two yahoos in Iowa (not calling people who live in Iowa yahoos, just these two jokers) who colored their faces black with indelible ink before committing a robbery. They were pretty easy to identify afterward it turns out.
Post Reply