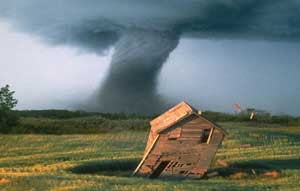 The shattered glass and rubbley beach sand whipped up at my bare legs so hard it had tore my flesh. Hurricane force winds had stirred up these earthen micro bullets and sent them careening so hard into me that it cut me open like a shot from a sand blaster. Stinging and bleeding, I looked into the ocean and watched the once deep blue sea turn a thick black. The churning water looked absolutely evil. Its body looking a running washing machine set to "HIGH" and filled to the brim with motor oil. It looked like a pipe bomb under a keg of Guinness Stout. Then the sound: who could forget it? The wind screamed and bellowed, it tore through the slats and beams on the bridge above making it Mother Nature's evil harmonica. Blaring tones and notes that the fat guy from Blues Traveler could only dream of emitting. The steel communications towers vibrated and resonated like huge tuning forks. I remember looking at my co-worker at the time and literally cursing the moment we agreed to do this... wondering if the OT I was getting paid was worth risking life and limb. I wanted badly to get out of the situation intact and to be able to tell people what we had seen and what we had done.

Sadly, the above story doesn't end with a bear attack, a daring rescue or even a $50 prize from Readers Digest for best "Drama in Real Life" story but it was a brief moment in time on a mission to capture the "perfect" sound effects for a major Hollywood film. Make no mistake, while this example was hardly routine, the need for field recording of authentic sound effects (SFX or "field effects") is a huge one in any major production. It's a guarantee that nearly every big budget film you've seen in recent (and possibly distant) memory demanded the capture of new, weird, wild or realistic sounds.

It usually comes as a surprise to even the most sophisticated of moviegoers that the sound effects in the films they watch are usually recreated and added after the film has been shot. All of this happens during a process known as post production. These sounds are typically not recorded on the set. Our minds are trained and used to the storytelling medium of the movie. We trust its realism and detach ourselves from the fact that it's a staged production. We allow ourselves to be transported and we believe what we see on screen. So much so, that often we only notice or consider such elements as sound effects in their absence, but rarely do we ponder their presence. While it's a sad irony for the sound designer who works so hard to achieve authenticity and an incredible sonic presentation, it's a testament to the lengths that producers, directors and those same designers are willing to go to create the most believable presentation possible. Believable to the point where you never even doubt the sounds you hear on screen. Field sound effects recording is a huge key to achieving this.

In Peter Weir's recent film, "Master and Commander: The Far Side of the World", FX designer and recordist Richard King went to great lengths to capture new, yet "period" authentic sounds. It's a very busy film visually and sonically - with muzzle loader guns, rope stress, wood cracks and breaks. The producers felt it very important to transfer you to a time and place as best as possible, to tell a story visually and convince you sonically. Richard King even claims that none of the sounds in the film were "canned" or previously used. 19 th century cannons were recorded in a field with microphones placed at varying distances from the weapon, tracking the sounds as the crusted steel wrecking ball whizzed by at ferocious speeds. The listing and waning of battleship interiors was also recorded to give the most realistic tone possible to the background ambiences. This is a classic and textbook example of Field FX recording: simply bringing a recording device into the field to record sounds that could not have been captured on the set to sonically brand the film with a sense of authenticity and reality that cannot be achieved via pre-recorded and previously used sound effects.

The sound on any feature film is usually just as involved as the visuals, taking months to complete. At the post production stage of a film (after shooting has wrapped) sound editing and designing usually begins. Collecting, conceptualizing and editing sound effects are all steps in the process. The sounds are assembled to give the movie its own unique voice and character as well as galvanize its realism or fantasy. While many of the sound effects you hear in a film are readily available on CD-ROM libraries from companies such as The Hollywood Edge or Sound Ideas, it is often the case that Supervising Sound Editors do not want to rely heavily on "stock" effects that have been heard a thousand times before. It's sort of like preparing a good meal for a big crowd…most likely you can get away with purchasing canned and familiar tasting items for side dishes, but you sure as heck better not buy the main course at Boston Market. In the case of many of today's special effects laden feature films, many unique sounds have to be created and more specifically captured to match the unique visuals on screen. While a minor visual element with little character such as a light switch or an alarm clock may be pulled from a library of previously used and recorded effects, a major element such as tank sounds in a war movie or specific cars in a chase scene may need to be captured in the field to give the film its needed authenticity.

Field sound effects recording is a fun task. It's a challenge to the Recordist to capture something new and unique - something unheard of or even too dangerous to capture in the past. This is not unlike the high of inadvertently having your video camera running during an amazing and unexpected freak accident. Unfortunately, trying to capture something unique and new can mean putting yourself in a very stupid or very dangerous situation, risking life and limb, or des troy ing expensive recording equipment in the process.

In 1999, Central Florida was hit by two major and successive storms: Tropical Storm Harvey and Hurricane Irene. I worked for a post production facility in the area as a fledgling sound editor. Being the youngest and the newest at the shop, I was the usually the "go-to" guy for things no one else wanted to do or the things that married life with children would not give others the time to do. Coincidentally as the storms were approaching we happened to be working on the movie The Perfect Storm . The film had entered the post production stages in our Hollywood offices.

An opportunity such as a real life natural disaster with a certified ticket to Orlando was too much for the supervisors of this film to pass up. The sound supervisor saw it on the news a million miles away and the call was made to Orlando . It wasn't long before the hot potato landed in my lap and I had the unenviable task of entering the maelstrom and coming out with something usable for the film.

It was time to pack my equipment...

Read the Complete Thread
Audioholics posts on May 28, 2004 09:12
Everyone enjoys going to a good movie and hearing the incredible sound that eminates from the big screen. But few understand where those sounds come from and what goes into making feature films sound the way they do. Indeed, it usually comes as a surprise to even the most sophisticated of moviegoers that the sound effects in the films they watch are usually recreated and added after the film has been shot (you mean they didn't just record that explosion?)

Part one of this article by Toby D. takes you behind the scenes into the work of a Field Effects Recordist and fills you in on some of the work that goes into making the feature films we all love to watch (and listen to). For much of Hollywood, the more unique the film, the greater the effort that is put into coming up with authentic and effective sounds that bring out the realism Producers, Directors, and Supervisors are looking for.