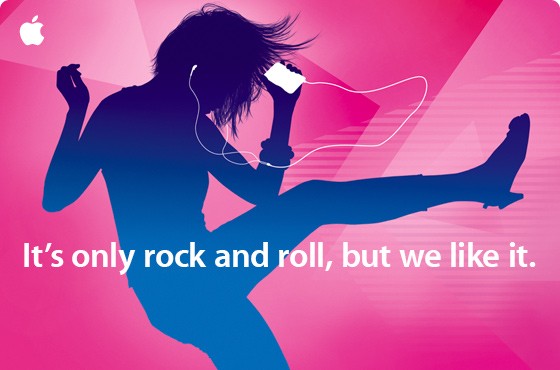 Someone call 911! The image on Apple’s keynote invitation looks like a crime scene victim’s chalk outline. The name of Apple's event tomorrow may invoke thoughts of the Beatles, that band that loved the number nine but doesn’t care for digital distribution. But the words on the invitation takes lyrics from the Stones. What does it all mean? While rumors of what’ll be in store at the Apple event are more elaborate than the Da Vinci Code, one thing is for sure: It’s Apple’s turn to strike in the war to be your next MP3 player.

For years Zune has been the punch-line of a sad joke. It’s been a serviceable MP3 player that remains in the basement of an Apple-dominated market. But Microsoft has announced radical changes in the Zune family to be released September 15. Gone will be the budget MP3 players. In their place is the new Zune HD; a premium Wi-Fi-ready media device with HD radio, a 3.3-inch 480x272 OLED touch screen display and it’ll be capable of outputting 720P video. Microsoft’s new wunderdevice will arrive in two solid state flavors; a 16GB at $219.99 and a “Platinum” 32GB version at 289.99. Serious technology upgrades mean the Zune-joke might be outdated come mid-September.

Apple has a proud tradition of a September keynote featuring Steve Jobs in his black turtle-neck sweater and jeans showing us the next must-have technology. The company also has a tradition of releasing new products the same day they’re announced at the September event.

The sheer depth of speculation preceding an Apple announcement is at least entertaining but some of the elaborate theories actually turn out to be right. According to bloggers like AppleInsider.com the iPod will be the star of this year’s event.

Wouldn’t it be nice if the next-generation MP3 players actually added technology to make better sound? Maybe MP3 players could improve sound quality with higher current headphone outputs or better quality DACs. This year it looks like upgrades for the next generation of iPods have nothing to do with audio at all.

Rumor has it, the new crop of iPods are about to get a camera! Great, that’s all the world needs is another cell phone camera! Somewhere on the Internet - a Photography-holics website has editorials bemoaning mobile technologies bastardization of their beloved hobby.

Other news expected to come out of the Apple 9-9-09 event includes new social networking features for iTunes. Great, now you can take bad pictures of yourself enjoying mediocre 128-bit MP3s from iTunes and instantly share them with your friends.

Another rumor has the Beatles library of music, a long-standing digital hold-out, finally caving to iTunes. It’s widely rumored that Apple will announce Beatles music on iTunes. This announcement would correspond with a new digitally remastered Beatles collection available on CD and a Beatles edition of the video game Rock Band. But I’m sorry to dash hopes, anonymous sources at the Associate Press reveal that no such announcement is coming. A statement from EMI, the Beatles label, simply states that discussions of digital distribution of Beatles music continue.

Who Will Host the Keynote?

One of the biggest sources of speculation about the keynote is not what but who. Will Steve Jobs make his first public appearance since undergoing a liver transplant?

The 54-year-old CEO only returned to work in June with the intention of pushing the company’s much anticipated Tablet project out the door. The long-rumored Apple Tablet is not likely to make Apple’s 9/9/09 event. The 10-inch touchscreen, pocket-sized tablet computer with 3G connectivity is likely to be saved for early 2010.

Even if this week’s Apple event has no earth shaking news - here’s hoping it’s delivered by a spry, energetic Steve Jobs back in the tech-industry spotlight.

MinusTheBear, post: 621391
Whether audiophile purists like it or not this market is here to stay. I believe a portable media section would provide a valuable service. AH can separate themselves from the “others” by providing factual and non snakeoil advice on portable media players, headphones, headphone amps, dacs, cables etc. Gene and Clint might be surprised on how popular a subforum like this might become (with all the hits this forum gets). It could open up avenues to reviews, potential advertisers and demand for products in Audioholics online store. Its a growing market and worthy of exploring .

I agree.. I was shocked how much info is out there in this category but some of it can be hard to find. I'm very close to getting a redwine audio ipod mod and DAC and would have loved a place to talk about it first…
chris357 posts on September 11, 2009 10:17
i have had my share of phones and the iphone is about as perfect as I can find. I've never been happier. it will be nice when there are competitors out there for service because AT&T has got us all buy the you know whats.. which sucks.
BMXTRIX posts on September 11, 2009 10:09

Actually, I'm at the point where I'm done renewing my Verizon contract and I will get an iPhone when my current contract expires.

Verizon will lose me as a customer for at least two years due to their failure to get the iPhone.
Hi Ho posts on September 10, 2009 21:40
I bought an Ipod Touch in June and the event yesterday actually made me happy because if they had made major changes such as a camera + OLED screen I may have had to buy again.

If/when the iPhone ever comes to Verizon I will be buying it. I'm always wanting internet on my Touch when I'm nowhere near WiFi and I have to resort to my Blackberry which is an abysmal experience in comparison.
Adam posts on September 10, 2009 21:23

BMXTRIX, post: 621557
The biggest disappointment of the show was definitely the Touch which apparently had some development snafus since Best Buy was showing Generation 3 Touch cases which specifically have a camera opening on them…

I agree. If the Touch had been refreshed with a camera, I might just have purchased one. The Nano is looking pretty cool, though.
Post Reply