Renovating a Family Room into a Home Theater 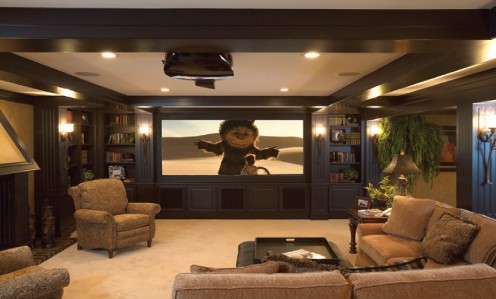 Turning your family room into a home theater

The owners of this 22-by-18-foot theater had no intention of updating their 1970s-style basement rec room. They were going to leave it as is, and focus their remodeling efforts on main living areas of the house. Their remodeling plan would include adding a Control4 control system to automate the lights and thermostats, and spread music and video to speakers and TVs throughout the house. The contractors and interior designers hired for the job couldn’t help but bring up the outdated rec room, though.

"When we spoke to them about the possibilities for that area, they decided to add a home theater [as well as a wine cellar, a bar and a billiards area] to the plans," says Tom Wilburn, sales manager at custom electronics firm TriPhase Technologies, Carmel, Ind.

What really sold the owners on having a theater was the ability to connect it to the Control4 system that was already being installed. As Wilburn explains, this would allow the owners to operate the theater components from the same type of wireless touchpanel and keypad that they were already using to operate the lights, thermostats, music and video in other areas of the house.

Before (left) and After (right)

While seated on a theater chair they’d be able to set the lights and adjust the thermostat in theater, plus control every light, thermostat and audio/video component upstairs. The video distribution capabilities of the Control4 system would also let the owners watch any movie that’s playing in the theater on any of 10 TVs located throughout the house. Using a wireless keyboard, they’d be able to access a PC to retrieve Internet content—like Hulu videos—right from the theater and view it on a 122-inch Stewart Filmscreen.

Rather than force their clients to scroll through a long list of commands, TriPhase created several macros, which would synchronize the setups of several different electronic devices. Pressing a theater button found on a keypad at the top of the stairs, for example, revs up the Planar video projector, turns on the Marantz audio/video receiver and activates the lights. An intermission button, which can be engaged from the wireless Control4 touchpanel, pauses the movie, illuminates the bar at the back side of the theater and turns on the fan in the powder room.

And because playing video games calls for a completely different room environment than movie watching, TriPhase created a special gaming button. The command activates the Nintendo Wii console, lowers the temperature, leaves most of the lights on and pulls motorized masking material across portions of the screen to change it from a CinemaScope size (2.35:1) to a 16:9 size...