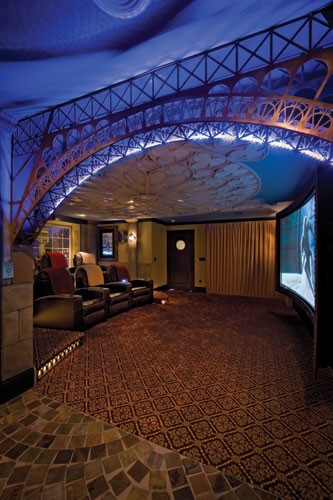 Home theater designer Donny Hackett has always wanted to visit Paris but had never gone. So he decided to bring Paris here. More specifically, to Tennessee and the attic of Jason Crist’s suburban Nashville home. A walk upstairs brings Crist to the Eiffel Tower, the Arc de Triomphe, the Notre Dame cathedral—and a screen that could take up a wall in the Louvre.

All of the attractions, including the whopping 154-inch screen, were custom built by Hackett, whose previous themed theaters have included nods to Titanic and Mann’s Chinese Theater. Crist already had a screen, surround-sound system and seating riser in his attic but wanted a more elaborate theater room. Hackett began the reconstruction project by deciding the screen would have greater impact on the opposite wall.

“I walked into the theater room, and there was nothing technically wrong with it, but it was backwards,” Hackett says. “You had to go into the room and around a corner before you saw the screen.”

He built the steel Eiffel Tower portion as a separation between the theater space and a snack area, which would later include a cobblestone floor and mural to invoke the feel of a Paris bistro.

The ceiling structure was modeled after a rose window of the Notre Dame cathedral, and the rear wall has a mural of the Arc de Triomphe. Hackett also incorporated the Paris motif in his clever concealment of the equipment rack. It’s located behind a motorized framed poster of the Eiffel Tower; a removable piece of wainscoting below the poster provides access to the rack.

Hackett, a consummate DIYer, always constructs his theaters’ screens. In the case of this Paris-themed theater, he used acoustically transparent woven material with a 1.0 gain and a curved shape to maximize the superwide CinemaScope projection (without those black bars showing on the screen).

He first sets up the projector and then builds the screen so it measures almost uniformly from the lens at all points - about 18 feet in this room. And at 154 diagonal inches, this curved screen is almost as enveloping as those in IMAX theaters.

“The curve allows the image to stay in focus, even on the far corners of the screen, and I noticed from the first one that I built that brightness and contrast are hugely amplified,” Hackett says. “Because of the parabolic nature of the screen, the light doesn’t bounce back in all directions but comes back toward our eyes instead.”

A Panasonic AE2000U projector and Panamorph UV200 vertical compression lens combine to produce the CinemaScope 2.35:1 aspect ratio images that stretch across the screen. Behind the screen, three Polk Audio RTi10 tower speakers serve as front left, center and right channels in a 7.1 system (Crist’s original Polks remained, but he replaced the center speaker with the more powerful tower model). Dipole surround speakers disperse sound from the sides of the room, and in-wall models are located along the rear wall.

Seven channels of X-10 controlled lighting control fill the attic, including fleur-de-lis sconces that flank the two rows of seating, LED rope lights on the Eiffel Tower, and hundreds of fiber-optic stars across the Notre Dame ceiling. Isn’t Paris romantic?

Seth=L, post: 662399
It's hard to detect my sarcasm, my sense of humor is slightly different from the hum drum. Being an AH member I would have thought you would have detected it.

No worries. You never can tell what will set someone off though. Tough to detect sarcasm without tone and body language.
Seth=L posts on December 18, 2009 22:21

oppman99, post: 662391
Easy Killer. It was meant to be humourous not an insult. I will be happy to delete the post if you are offended.

It's hard to detect my sarcasm, my sense of humor is slightly different from the hum drum. Being an AH member I would have thought you would have detected it.
oppman99 posts on December 18, 2009 21:48

Easy Killer. It was meant to be humourous not an insult. I will be happy to delete the post if you are offended.
Seth=L posts on December 18, 2009 20:11

oppman99, post: 662343
Paris themed…..Does that mean dirty, overcrowded and full of rude people? Kidding aside, I like the look of it. Not sure I would go to that extreme, but very nice.