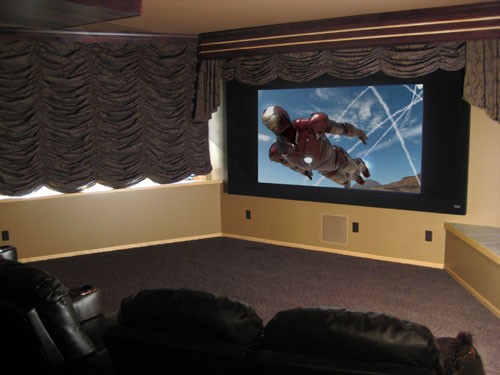 These homeowners had an odd shaped room, one that wasn’t built to be a dedicated theater like a basement ... but an old entertainment system that really needed an upgrade.

After finding custom electronics pro Union Place, of Excelsior, Minn., they turned it into a gem of a theater, complete with constant image height screen setup for really immersing in CinemaScope aspect ratio films.

“The homeowner was interested in the latest technology – constant height cinema. He had a large family and wanted to be able to seat eight at a minimum,” says Union Place’s Brian Duggan. “The challenge was to create a room that functioned as a cohesive theater, without giving up space and in needed to blend with the other rooms of the home it was open to.”

Because it wasn’t a dedicated room closed off to the rest of the house, Union Place also had to control the lighting from both the interior spaces and the exterior window. “We found the best orientation that we liked and found inspiration from a public indoor theater in the area,” Duggan says. “We decided that we would have a large wood cornice as the defining proscenium feature and then use a smaller wood cornice around the perimeter of the room to unify the space.”

The installers incorporated a Marantz projector with a Panamorph lens system, and built a projector housing to conceal the large projector and screen apparatus. With a couple rows of seating in there and little floor space, there wasn’t much room left over for speakers, so an SmX acoustically transparent screen was the ideal solution—hiding the There wasn’t much space left in the room space for speakers, hiding the Triad left/center/right speakers, while surrounds are in the ceiling.

Seth=L, post: 633542
This is annoying. Why is the ‘ messed up in admin posted threads? It’s been doing this for the past several months. Is it some kind of format error?

I have wondered about that. I think it is something related to the way the HTML code comes through to the forum, getting messed up en route…

Speaking of weird formatting and such, I would also kind of like to know why your signature and location also looks messed up to me. I was assuming you had some sort of tricky trick and that it was on purpose, but I never saw anyone else mention it.

Seth=L posts on October 10, 2009 20:57
This is annoying. Why is the ‘ messed up in admin posted threads? It’s been doing this for the past several months. Is it some kind of format error?
Post Reply