A Home Theater in Stargate Atlantis 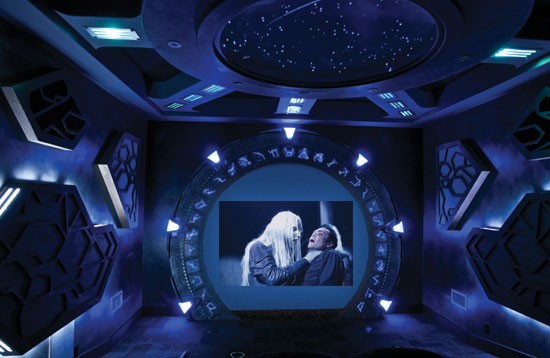 A home theater can be a great escape, but how about escaping all the way to the planet Lantea, the fictional home of the TV series Stargate Atlantis?

Jacob Yarmuth’s very cool theater in Louisville, Ky., has the Stargate — or at least a replica of the one used in the Stargate TV series and movie to commute across the universe. It surrounds a 10-foot diagonal circular screen that shows a 96-inch diagonal image. The circle within the Stargate can also light up blue, mimicking the water that appears in the show’s Stargate prior to transport.

To say Yarmuth is a Stargate fan is an understatement. He loves sci-fi, and his two Sony megachangers that house up to 800 DVDs can attest to that. The theater, explains Phil Chaney, president of the Louisville division of Visual Concepts, uses a blend of styles from Stargate Atlantis, the original Stargate SG-1 TV series, and the 1994 movie. There are even air pocket doors that open like those on Star Trek and a star dome that shows comets streaking across the sky.

And yes, much like the magic of fictional Stargate, a lot of real-world magic went into constructing this theater:

Read the Complete Thread
Cruise Missile posts on July 12, 2011 00:43
The water effect club light may now become part of my theater. That is a cool idea for lighting the screen when not in use.
annunaki posts on July 10, 2011 08:37
I think it is a pretty neat concept. It definitely looks cool. However I was pretty disappointed to see that with as cool as that room looked he only got Polk in-wall subwoofers in the $70K price tag. At least he received some quality in-wall speakers with Atlantic Technology…

I think that if the owner of the theater is OK with the theme losing popularity over time with other and is happy with it, to each their own.
Zuhkov posts on July 08, 2011 14:41
As long as you can turn down the lights and effects, I like it. Always interesting to see someone else's dream made reality. Still, I agree that I'd be worried that I might get tired of the theme over the years. Hopefully, if you can spend to do it once, you can spend to do it again. I'm quite a long ways from being able to do it once.
lsiberian posts on July 08, 2011 11:30

Clint DeBoer, post: 818943
The trouble with themed theaters like this is… will it be cool 5 years after the show or movie has been long gone? Even the Star Wars themed theaters seem like they are destined for obsoletion… they just get a longer shelf-life.

I remember my aunt buying every VHS known to man. I wonder where they are now. It's cool to like a show, but a theme taken to far loses it's fun IMO.
Clint DeBoer posts on July 08, 2011 09:52
The trouble with themed theaters like this is… will it be cool 5 years after the show or movie has been long gone? Even the Star Wars themed theaters seem like they are destined for obsoletion… they just get a longer shelf-life.
Post Reply