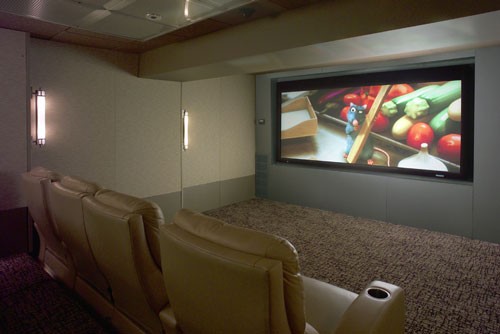 Unless you can build your home theater from scratch, it’s likely that you’ll have to jump a few hurdles to get a room into shape. Often, it’s a choice of the lesser of two evils.

The owners of this theater had originally planned on converting a lower-level guest bedroom into their media area, but after a chat with the custom electronics pros at Audio Video Interiors in Medina, Ohio, they decided that the larger storage area was a better choice.

“The bedroom wasn’t big enough for the 10 people the owners wanted their theater to seat and the ceiling was too low,” says Joe Calderaro, the electronics designer and engineer of the project.

The 336-square-foot space may have offered the real estate the owners needed, but it was far from perfect. Ductwork and steel beams spanned the width of the ceiling, and a water meter and plumbing occupied the back wall.

All this would need to be dealt with before a single piece of equipment could be installed, and the owner brought in a general contractor to handle the build out. His work would involve building a soffit around the ducts and beams and building a false wall over meters and plumbing. A new wall would be built at the front of the room, as well, to create a storage area for a rack of audio and video components. Per the interior designer’s request, the side walls would be slightly angled for visual effect. Even areas like the guest bedroom and a kid’s craft area were modified to create a larger hallway into the theater and to provide access to the hidden theater gear. The entire construction process took about three months.

Audio Video Interiors kept busy during the build-out, though. “We spent a lot of time engineering the space so that the equipment would work perfectly once we were able to put it in,” says Calderaro.

He and crew members would visit the project several times during the three-month build-out to measure, check site lines and run tests.

One of the biggest areas of concern was the projector. The machine would have to be able to shoot underneath the new ceiling soffit to project its images on the 9-foot-wide Stewart Filmscreen screen. Audio Video Interiors chose a Runco RS1100 projector and dropped it lower than normal from the ceiling (the bottom of the unit is about 18 inches from the ceiling surface). Audio Video Interiors carefully calculated the height of the risers and the arrangement of the room’s 10 chairs to ensure that the projector wouldn’t be in the way of anybody’s view.

The seven Triad speakers and two Triad subwoofers that make up the surround-sound system wouldn’t be in the way, either. The front three units and both subwoofers were placed behind the acoustically transparent screen and the four rear speakers were recessed into the tapered side walls and covered with acoustical fabric.

Remarkably, even with all this equipment, it took Audio Video Interiors just one week to install and connect everything. Calderaro chalks it up to good planning and coordination with the contractor, interior designer and homeowners.

Discuss This Article
Phil Taylor posts on July 21, 2009 14:19
The bottom line here is - are the homeowners happy? I'd imagine they are. Is it perfect - no, but it looks pretty damn good from what they evidently had to work with - retrofit installs are often a matter of compromise of one sort or another. I would have liked to see some “before” pictures in the slideshow.
BoredSysAdmin posts on July 21, 2009 11:15
Building home theater out of storage space seems like very budget minded idea, but 100 to 250k budget spent on this project screaming otherwise…
If I would be in this house owner spot, I might consider paying just a bit more for moving the air ducts or again building out new house extension dedicated for home theater.
My point is, I don't know why he decided on this project to be done this way, but It seams that budget was hardly his limit.
In his shoes I'd spent half of the amount to get about 99.999% of features on this build-up…
bandphan posts on July 21, 2009 10:47

BoredSysAdmin, post: 599735
Is it just me, or looking at the list of equipment, tells me the budget of this project could be instead put into building whole new dedicated room.
Runco projector by itself is over 12k, LCR's $800 each plus lets not forget the “high-quality” Monster interconnects…..

Honestly, agian what is wrong with the theater?
BoredSysAdmin posts on July 21, 2009 10:29
Is it just me, or looking at the list of equipment, tells me the budget of this project could be instead put into building whole new dedicated room.
Runco projector by itself is over 12k, LCR's $800 each plus lets not forget the “high-quality” Monster interconnects…..
bandphan posts on July 21, 2009 08:44
Upon further review the LCRs do not appear to be inwall
Post Reply