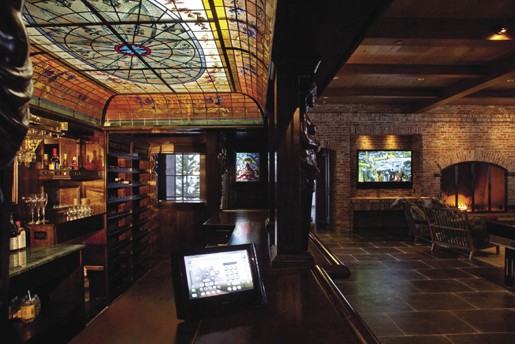 When your living quarters are as large an airport hangar, simple tasks like turning off the lights before bedtime can be exhausting. That’s part of the reason the owners of this newly built Idaho estate invested in a sophisticated control system. But operating hundreds of lighting circuits is just the tip of the home control iceberg for this slick management system.

Rosie appealed both to the family and the Home Media crew. “It has the capability to seamlessly sync a wide range of systems, which gave us more time to customize the system to the family’s needs,” explains Home Media president Kevin Carey. For the family, Rosie permitted the use of familiar devices like iPhones to operate all the home’s electronic systems. “They’re also set up to use an iPad,” says Carey. “That will be a device that really runs the whole show.”

There are numerous other interfaces the family can use to monitor and manage the massive estate. A Savant Touch TV in the kitchen, for example, provides a 24-inch screen to view the status of the various systems, issue commands to any device, and display video from a plethora of components located in an equipment rack in the lower level.

Two smaller touchpanels—one in the master bathroom and the other in the party barn—provide the same bird’s-eye view of the property. Or the family can bring up the Rosie control menu on any of the home’s 11 flat panel TVs, including a Runco 103-inch plasma in the movie lounge. With the TVs, they use handheld remotes to navigate and issue commands.

The family of seven can operate each subsystem individually via the Savant interfaces. From the pool and spa page, for example, they can turn on the pump and raise the water temperature. Switching to the audio page, they can choose music to play through of any of the 22 music zones. A quick jump to the lighting page, and they can turn on only the lights around the pool and in the kitchen. In seconds, the place is ready for an evening pool party.

Equally important to this family is the ability to visually monitor what’s happening around the property. One touch brings up a floorplan of the house, where they can see the lights that are on, the position of the drapes, what doors are unlocked and which TVs and speakers are in use. This quick-peek feature is a tremendous help to the family when they’re leaving the house.

“They can see at a glance what needs to be turned off or locked up before they go,” says Carey. “Without that feature, it would take them an hour to check on everything.” One place the owners rarely check up on, though, is the wine cellar. Located off the kitchen, it can only be accessed by entering a secret code into a wall-mounted keypad. Even if someone does crack the code, getting inside would be tough, as the door is completely hidden in the wall paneling.

It’s no secret how much the Savant system has enhanced the family’s lifestyle. Music and high-def video are at their fingertips. And preparing the huge house for a big event takes just a matter of seconds. They can leave in a moment’s notice and tap into the surveillance cameras to check out the action on the basketball or tennis courts. It’s all right there on the screen.