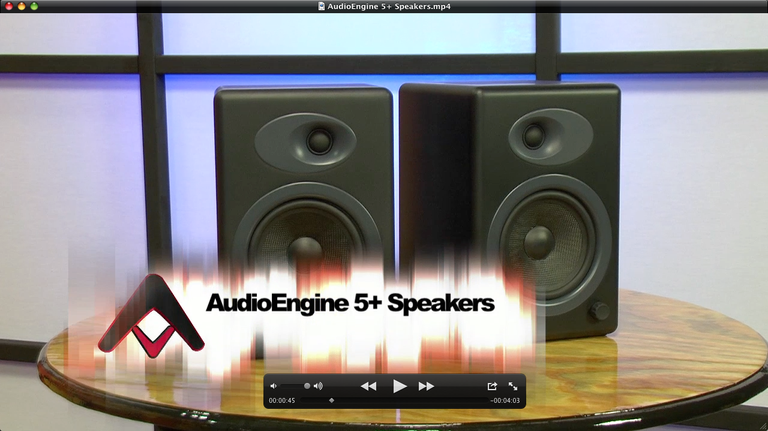 The last time we touched an AudioEngine A5 speaker was back in 2006. Now 5-1/2 years ago we felt that the A5's had, and I quote "superb build quality, finish, and high-end sound quality". Well, nothing's changed. End of review. See ya later.

OK, a couple things are different - but mostly for the better. First of all, if you loved the AudioEngine A5 speakers, you can still get them -  in fact, they're $50 less then they were when we reviewed them. The A5+ speakers, however are more or less a model that is designed for multimedia or active monitor use. They lack the odd top USB charger of the A5, instead moving it to the back. They also dropped the auxiliary power outlet, which was perfect for the popular Apple Airport adapter. What they added was a pair of RCA inputs - and they made the RCA outputs variable - so you can connect them up to a subwoofer and get extension well below 50Hz, which is about what you can expect from the A5+ speakers on their own. For multimedia speakers, the extension of the AudioEngine A5+'s is going to give you some excellent real-world low end not found on most other 2.0 systems. But like we said - add their S8 sub or a similar model and it gets even better.

The build quality on these speakers is still pretty exceptional, with around 1/2-inch of MDF for the enclosure, but the front baffles look to have a bit more material. The woofer is a 5-inch Kevlar model and the tweeter is silk-domed. The passive crossover is more advanced than you typically see on speakers costing this much and the sound reflects an attention to detail with respect to how everything works together. The 50W per channel amplifier is all housed in a plate amp on the left speaker, but the quality is superb, with a large toroidal transformer topping off the power supply. The cabinet is hand finished according to AudioEngine and the speakers are available in Black, White, or a Premium Bamboo that carries a $70 upcharge. There's also a remote control to handle volume adjustment and muting. The Mute and Sleep buttons do essentially the same thing, which is to dim the audio down to zero and, at least in the case of the sleep button, put the unit into a standby mode. Press the button or adjust the Volume, and the speakers will "wake" from either Mute or Sleep modes.

Listening was, of course, the best part of reviewing these speakers and we played them very loud. Queensryche Empire - 20th Anniversary Edition topped my list because I was testing out our Spotify Premium account and I hadn't heard that band in a while. Stereo imaging was rock solid and these speakers have a way of playing at very high volumes without bottoming out, though there did seem to be some slight compression in the midrange. We also fed them with high quality audio from iTunes, including tracks from Switchfoot, R.E.M., Yes, Boston, and Pink Floyd. It was an eclectic day of listening, but it also proved that it doesn't really matter what kind of music you piped through the A5+'s, they sounded better than just about every multimedia speaker I've heard in the past few years. In particular, we loved the dynamics and spatial imaging afforded by songs such as Yes' "Leave It". It was this kind of performance that had us listening to the AudioEngine speakers for hours at a sitting. Now, at $399/pair, the A5+ speakers aren't going to be for everyone. But if you like quality sound, they can really hold their own against many of the similarly-priced powered monitors we've heard from the competition. The only exception would be bass - they don't artificially enhance theirs and so you might get more from a competitor. But we would say that this is a benefit because you shouldn't tune cabinets this size that low - just plan to get a subwoofer.

These speakers are easy to set up, easy to use, easy on the ears... we just wish they were a bit more easy on the pocketbook. Still, they sound great and if you put these on your workstation or desk we think you're going to be impressed with what you hear.

imo, that JBL looks sweeter too, but is double the cost, putting it in the 3030A range.

I had a Best Buy gift card and for once the shipped price was comparable to any other online seller. I would have considered others, but the 1030a was is the only one in my budget ($50 + gift card) that had the level and FR contouring controls.
BoredSysAdmin posts on January 05, 2012 10:37

agarwalro, post: 853854
I picked up a set of Behringer 1030A monitors (the built-in tweaking capability was the clincher since I am not doing any pre-processing). I have done only the most rudimentary tweaking (using ear for levels in 2.1 config.) and subjective results are very encouraging.

I wonder how they compere to the 1030A or the Audessy Media Speakers (that have Audessy EQ and Bass XT built in!). Self powered speaker shootout perhaps .

I wonder how these compare with the airmotiv 3 or 5 speakers. Hopefully Audioholics get's a pair in to review.

I wonder how they compere to the 1030A or the Audessy Media Speakers (that have Audessy EQ and Bass XT built in!). Self powered speaker shootout perhaps .
Post Reply