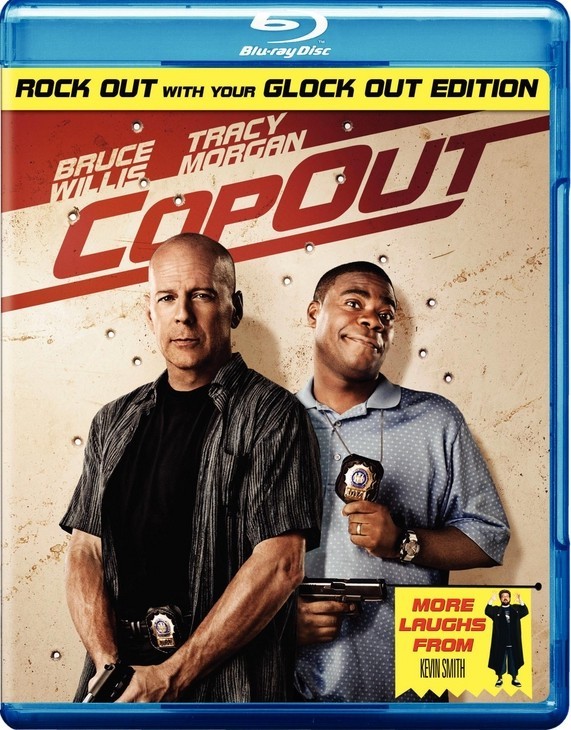 ROCK OUT WITH YOUR GLOCK OUT.

If someone could please enlighten me as to what this Kevin Smith-helmed goof fest was all about, I’d be forever in debt – okay, let’s not go that far, folks, but seriously…what was Bruce Willis thinking taking this gig? I am uncertain what this was supposed to be – a mockery of his John Mc Claine character from Die Hard, a spoof of cop buddy films or…I just don’t know. Perhaps the real saving grace here was Tracy Morgan – who is getting really old if you look at him closely on this 1080p encode – as he chews up the onscreen time with hysterical, off-the-wall responses and dialogue delivery. Still, what an odd team these two make…and I still don’t know what to make of this even after hours of mentally analyzing it.

While marketed as a comedy, parts of Cop Out get so stupid and unrelated from one another that you find it difficult to concentrate on what’s going on; I suspect fans of Smith will “understand” the humor on display here and the underlying insanity it was supposed to inspire – the whole thing was lost on me…well, for the most part. There were some insanely funny gags that had me in stitches, even for a comedy, including a sequence involving a cursing, off-the-wall 11 or so year old that’s driving a Corolla to get away from Willis and Morgans’ cop characters.

But let’s back up a bit – the premise of Cop Out is that Willis and Morgan are detective partners in the NYPD but the problem is that Willis plays the role cold and straight – like his aforementioned Die Hard characterizations.  Morgan is just completely off his rocker what with dressing up like a giant cell phone to go undercover to stop a robbery which leads to a drug investigation.  The combination of the two just didn’t work.  Also, Willis’ daughter in the film is getting married and Willis wants to pay for the wedding but his ex-wife’s new a-hole hubby (who you just want to reach inside your screen and strangle) attempts at every avenue to make Willis guilty about not having enough cash to make the wedding of her dreams. Willis’ answer is to sell one of his treasured, valuable baseball cards to a collector’s shop somewhere in one of the boroughs of New York (most likely Brooklyn). But once in the shop – with Morgan outside the front door jumping around in the aforementioned cell phone outfit in an undercover sting – Willis is caught off guard when a couple of idiots decide to rob the place, one of them being Seann William Scott. Scott’s moronic banter and ridiculously erratic delivery of his dialogue as he mentally “messes” with Willis and Morgan once in their custody is actually mildly entertaining, as Willis goes to extremes to find out from Scott where his now stolen baseball card is and Morgan deals with what he thinks is his smokin’ hot wife cheating on him with a neighbor.

But wait – it gets better: Morgan and Willis are lead to a Puerto Rican drug kingpin’s lair and discover that he is the one who has Willis’ baseball card as in his gang’s apartment resides a room dedicated to baseball memorabilia…I’m not kidding. And this is all supposed to be witty comedy…

If you haven’t fallen asleep yet, you’ll be treated to, as I said, some truly hysterical dialogue delivery and gags by Morgan and Scott, as well as that sequence involving the little Spanish kid who gets behind the wheel of a Corolla S and then proceeds to swear and curse like the worse sailor you’ve ever come in contact with – the scene is pretty hysterical. Perhaps even more memorable was Morgan’s replies and reactions to the kid’s uber-potty mouth.

As I said, I am extremely uncertain exactly what Kevin Smith was going for with Cop Out – was it supposed to be the cop buddy version of Clerks? Was it the modern-day interpretation of The Naked Gun? Most of it was just plain stupid, including the odd score and feel of the pacing; this was far from melon-headed Bruce Willis’ best. The notion that he is chasing a pack of juvenile wanna-be tough guys representing a Puerto Rican drug cartel because they are keeping his baseball card hostage (so he can pay for his daughter’s wedding) was absolutely asinine.

Again, though, the whole “point” of this may have been severely lost on me…

VIDEO QUALITY ANALYSIS: HOW DID THE DISC LOOK?

Surprisingly wide in scope for a “comedy,” Cop Out comes on Warner’s Blu-ray transfer as a 2.40:1 widescreen image, and as far as I could tell, there was nothing wrong here. Close-ups of Willis and then Morgan were (disturbingly) real and excitingly detailed; outdoor shots of the New York borough neighborhoods were as detailed as they have been on all recent high def transfers such as Brooklyn’s Finest.

AUDIO QUALITY ANALYSIS: HOW DID THE DISC SOUND?

The audio quality was a different story – encoded as a lossless DTS-HD Master Audio 5.1 mix, the soundtrack to Cop Out was about as disappointing as the essence of the film. It sounded as though there were some budget constraints holding something back here, as the overall volume of the track was weak and required more gobs of amplification on my system than normal. This lead to dialogue intelligibility issues if the volume was down too low, while the entire mix just came across as “stuffy” and “closed in;” there were moments of gunfire sequences which added some brief bursts of LFE to the material in addition to bullets hitting the surround channels, which were satisfying, but for the most part, this wasn’t a memorable affair…much like the feature itself.

I don’t know what to say here. I suppose if there is nothing on the Blockbuster or Hollywood Video shelves to rent, give this a try – I always thought Morgan was hysterical on Saturday Night Live, but Willis is simply odd here. Couple that with a laughable plot – even for a “spoof” project – and the confusion over exactly what this film was supposed to actually be about, and you have a real head-scratcher when it comes to Kevin Smith’s Cop Out.

This isn’t one I will personally be adding to my collection shelf, but as always, your mileage may vary.

Thank you very much for reading.

majorloser, post: 746772
Watched it last week. Both the wife and I thought it was pretty damn funny.

Okay, well, that makes two of you…

All kidding aside, this film was just awful…I pointed out in the review that there were some moments of unbridaled humor, such as when the kid is cursing outside the Corolla, and when Morgan is dressed up like the cell phone…but regardless, this simply wasn't memorable cinema, by any stretch of the imagination, and Willis and Morgan were absolutely wrong for each other. I would be fine never seeing this one again – ever.
majorloser posts on August 29, 2010 19:04

I thought cop out was brilliant with bruce willis, dead funny and loads of bad language, kick *** was also good…deamon guy
PearlcorderS701 posts on August 27, 2010 17:16
Thanks for your thoughts; indeed, this was a mildly entertaining rental at best, but nowhere near living up to the hype suggested by the pre-media teaser blitz…
Post Reply