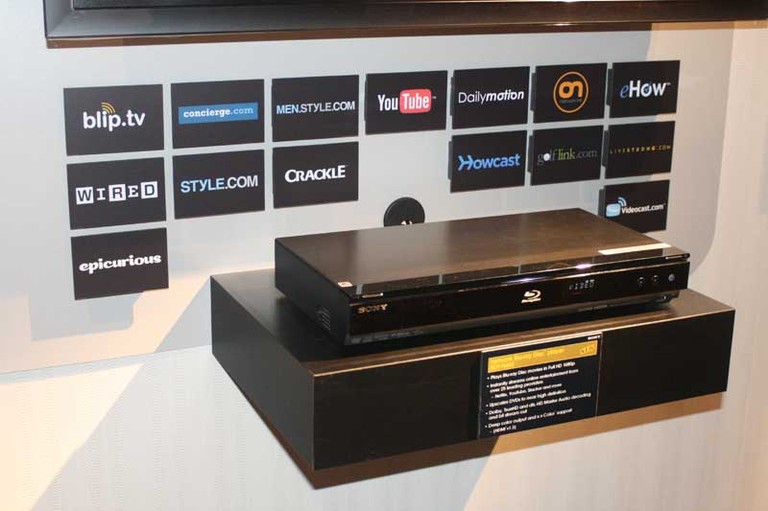 Sony kind of stunned me with their new BDP-N460 networked Blu-ray player. What was most impressive was the amount of network features available to the player and it's almost mouth-watering price of just $250. Beside playing Blu-ray discs and DVDs, the device instantly streams one of the largest collections of premium and free on-demand entertainment from the BRAVIA Internet Video platform including thousands of movies, TV programs, and music from YouTube, Slacker, and, later this fall, Netflix.

The BDP-N460 Blu-ray player delivers 1080/60p and 24p True Cinema output, decodes the latest advanced audio codecs, and is technically BD-LIVE (Profile 2.0) capable with your broadband Internet connection. The catch is that users will need to grab a USB thumb drive (at least 1GB) in order to meet the requirements for BD-LIVE. Since these flash drives cost almost nothing (and many of us have them lying around) this isn't a terrible place to cut costs... though if a USB thumb drive costs ME $5, it shoudl only cost Sony a few pennies... Odd that they didn't just include one and put the User manual on it to cut costs.

The BDP-N460 also features built-in software specially designed for use with the Linksys by Cisco Wireless-N Ethernet Bridge with Dual-Band. The bridge helps ease the connection between the Ethernet–enabled player and a wireless router in either the 2.4GHz or 5GHz radio band for optimal streaming. The model also features a cross search function to make finding Internet content on the BRAVIA Internet Video platform easier.

Since many consumers own extensive DVD movie libraries, the BDP-N460 incorporates Sony’s Precision Cinema HD Upscale technology that converts standard-definition signals (480i) to near HD quality. We've never been terribly impressed by Sony's deinterlacing, but in general Blu-ray content doesn't require much processing in order to look excellent.

Additionally, the model features Sony’s Precision Drive technology, which helps to detect and correct wobbling discs from three directions, supporting stabilization of warped or scratched Blu-ray Discs and DVDs during playback. Anyone who uses Netflix will appreciate this!

The BDP-N460 can decode the latest advanced audio codecs including 7.1 channel Dolby TrueHD and Dolby Digital Plus, DTS-HD High Resolution Audio, DTS-HD Master Audio.  The model can also output 7.1 channel L-PCM via HDMI after decoding, making them compatible with ANY flavor of HDMI-equipped receiver or display.

It supports Deep Color video output and x.v.Color (xvYCC) technology.  The model is compatible with an array of video formats, including BD-R/RE (BDMV and BDAV modes), AVCHD, DVD+R/+RW, DVD-R/-RW, CD, CD-R/RW (CD-DA format), and JPEG on BD/DVD/CD recordable media. In addition to the rear external port for local storage required for BD-LIVE content, a front USB port can be used to display digital photos.

Available in October, the BDP-N460 will be offered at Sony Style stores, online at www.sonystyle.com, at military base exchanges, and at authorized retailers nationwide for about $250.

I'm wondering when people will start reviewing these Bluray players and real differences will be found? They all have great features…but which one has the best picture quality? Why is on costing $250, but some that have lesser features cost $1000?
mulflujum posts on September 16, 2009 05:36

I am glad to find your site - now I know what a good one looks like.
Very good topic to share with us. Great info.
Seth=L posts on September 16, 2009 01:17
For some reason the article is 404, a search indicates that it was ever listed, or was accidentally removed. It's also possible it's undergoing some editing.
Adam posts on September 16, 2009 00:56
Hi. The article link doesn't work for me. Does it work for other people here?
Post Reply