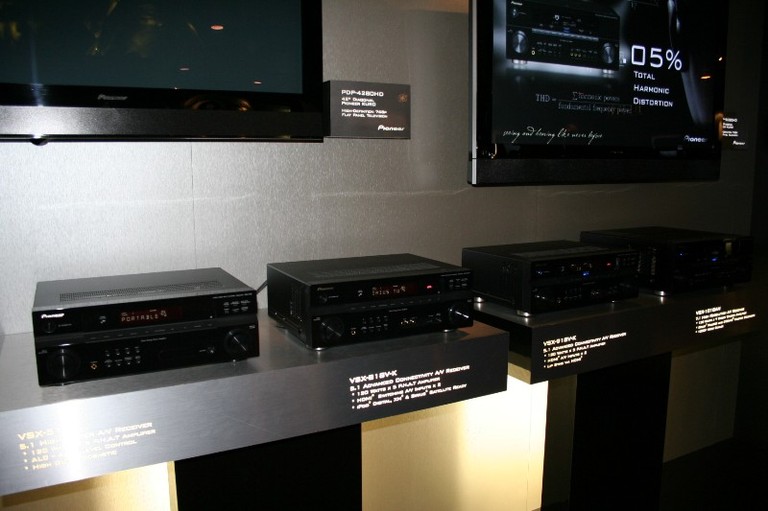 Multi-Channel Acoustic Calibration (MCACC) – Continuing to lead the industry with high resolution sound tuning, the VSX-818V-K, VSX-918V-K, and VSX-1018TXH-K receivers give users a customized audio performance from their movies and music. MCACC room calibration takes inventory of a room’s connected speakers then digitally fine tunes each one to balance out any room-induced acoustic inaccuracies. Listeners gain extremely accurate, robust sound that reaches the ear at precisely the right time, sound level and equalization. With the VSX-1018TXH-K, users can make additional subtle adjustments as well as save room tuning settings with the Advanced Multi-Channel Acoustic Calibration feature.

Sound Retriever Technology the proliferation of portable players and satellite radio devices requires audio files be reduced in size often at the expense of sound quality. In response, Pioneer’s proprietary Sound Retriever DSP technology is incorporated in all four models. The function works by “filling in” and compensating for the audio data removed from the compressed files (WMA, MP3, MPEG-4 AAC) for music playback that is near CD quality.

Multi-Zone Audio – With the VSX-1018TXH-K, individuals in two separate rooms can enjoy audio from connected devices through the receiver. For example, while one user is viewing a movie in surround sound the main listening area, a second zone environment can enjoy a music CD, XM and/or Sirius satellite radio, iPod as well as any other analog source connected to the receiver. Multi-zone capability is an easy way for “do-it-yourself” multi-zone music distribution and is a key feature for those who wish to have a full custom installation application.

Listeners can relax and enjoy the crystal-clear programming from each provider. The top three Pioneer A/V receivers also provide immediate "plug and play" enjoyment of iPod music content via a front panel digital USB port. With iPod Digital, the receivers are compatible with the iPod’s connector cable eliminating the need for a separate dock while maintaining functionality. The iPod can be fully controlled with the unit’s remote control and OSD capability allowing users to navigate and share their playlists.

About Pioneer
Pioneer’s Home Entertainment and Business Solutions Group develops high definition home theater equipment for discerning entertainment junkies. Its flat panel televisions, Blu-ray Disc players, A/V receivers and speakers bring a new level of emotion to the HD experience. The company brands include Pioneer and Elite®. When purchased from an authorized retailer, consumers receive a limited warranty for one year with Pioneer products and two years with Pioneer Elite products. More details can be located at http://www.pioneerelectronics.com/PUSA/