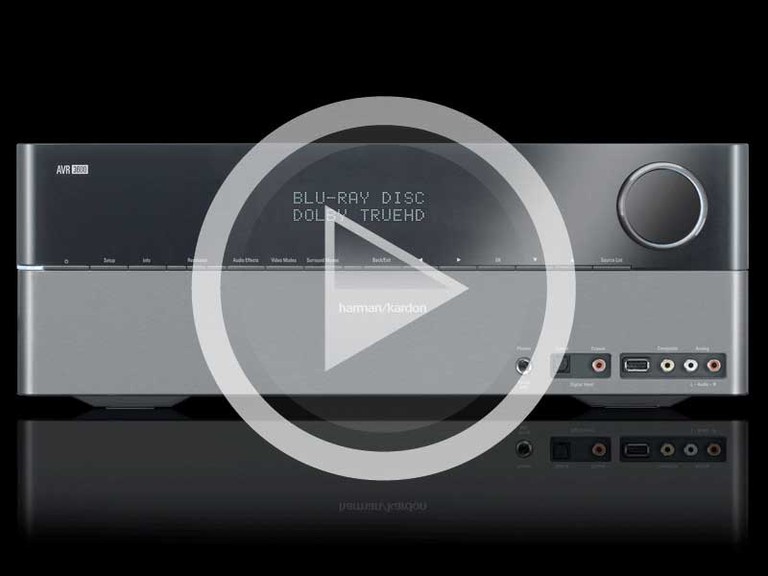 At just under $1000 the Harman Kardon AVR 3600 isn't a cheap receiver. So, what exactly do you get for all that additional money? Well, for one, you get more power. People like to read specs and the first thing you may note about the Harman Kardon AVR 3600 is that it "only" has 80 watts going to each of its 7-channels. The thing is, Harman has always been a little odd in how it rates its receivers and if you want an apples-to-apples number, we'd put their 80 watts at around 105 watts or more - but that's just an estimate.

With that said, you also can't ignore that this receiver has the ability to convert anything you put into it to HDMI and scale it to 1080p for your display. We're not just talking about converting analogue to digital either, this receiver actually outputs up to 1080p from standard definition sources like a VHS or DVD player. OK, now that's digital video upconversion, but it also does analogue video upconversion - and that's even less common these days (or it costs a whole lot more money). Typically you get one or the other, but the Harman AVR 3600 can even take composite video and bring it up to component video - and at up to 1080i resolution. I play a lot of games and this is cool because an older Xbox 360 often encounters lag, or delay, when using HDMI. This is especially noticeable on rhythm games like Rock Band or Guitar Hero. You can also bypass all video processing when using HDMI - this is a game mode, but Harman just calls it HDMI Bypass.

All the processing and scaling is done by a Faroudja (Fa-roo-ja) DCDi chip. This is proven technology and though its a tad dated, it still does a pretty bang up job. Another thing we liked about the AVR 3600 is that it has a full color high def graphical on-screen menu which overlays on top of the picture, so you can make adjustments to your system while the source material plays underneath. This isn't something you will find on most entry- or even mid-level products.

If you look on the back, the AVR 3600 has four HDMI inputs with the ability to decode all the current HD audio formats. There are two component inputs, plenty of composite inputs and, like with many receivers these days, the dreaded S-video connection has been eliminated. Good riddance. Harmon's also includes their proprietary setup & EQ technology which uses an included microphone to automatically configure your system to work optimally with your speakers and in your particular room.

There is also a completely discrete second zone. That means you can run a 5.1 system in your theater room, while playing stereo music in a second room. This is very cool, though there are some limitations. For one, the Zone 2 speakers outputs are shared with the Surround Back speakers, so you have to decide and then use the menu system configure the receiver. The second big limitation is that Harman didn't provide any digital to analogue audio conversion for Zone 2. It's strictly analogue only, so you can't use a digital source like a CD player, unless you also hook up its analogue outputs. Harman even included a separate Zone 2 remote. This is separate from the 8-device backlit learning remote that also comes with this receiver. All-in-all the remotes mean that you at least have a fighting chance to bring all of your other sources together onto a single remote. Look, we could talk about this receiver all day, but we'll park it there. Suffice it to say there is a lot to like about the AVR 3600 receiver from Harman Kardon. If you get a chance to give it a listen we highly recommend it. The company will also provide, free of charge, a USB update in September that will bring these receivers up to full HDMI 1.4a compatible with 3D support.

Comparing the Denon 4310 to the HK 3600 seems a little out of balance, since the original SRP of the 4310 is double that of the 3600. Especially for the power output specifications..

Kinda like comparing a Toyota Yaris to a Toyota Camry..
However at the present closeout price of the $999 for the 4310, plus being bult in Japan it is one of the best buys out there.

angryjanitor69, post: 777202
can you confirm that the AVR 3600 supports both True Dolby HD and DTS-HD?
I'm looking at purchasing this unit and want to be sure that it supports both of these formats.

Just my $0.02…
PENG posts on December 28, 2010 20:15
I find this really funny about how HK rates their AVRs power. Those who only look at advertised specs might have missed out because they thought HK AVRs don't offer enough power. Those (some but not all) who know about their traditional way of rating their power outputs could well be misled to believe HK's 80WPC $1000 AVRs in fact offer more ‘real’ power than Yamaha, Denon, Pioneer models in the same price range.

Let's ignore the advertised/published numbers, tests after tests after tests by HTM, S&V, HCC etc. show the 80W rated HK would get you about 105W (may be a little more) just like Clint said; and most $1000 Yamaha, Denon, Pioneer, Onkyo models have their lab measured 2 ch output > their published numbers and would generally be >120W while their ACR numbers could be much less. So the whole thing is confusing for the average consumer and may be the best way to compare apple to apple is to use the figures $ per lab measured watt for both 2 channel and ACD. The consumer can then make his informed decision. Some may focus more on the 2 channel number while others may go for the superior ACD numbers.

can you confirm that the AVR 3600 supports both True Dolby HD and DTS-HD?
I'm looking at purchasing this unit and want to be sure that it supports both of these formats.
Post Reply