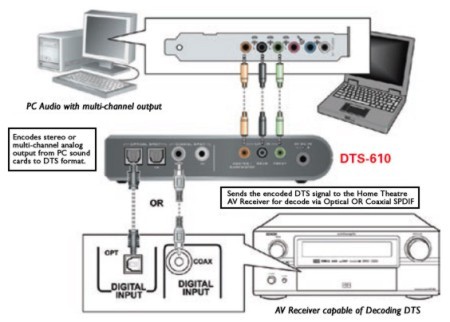 Many people have asked us about connecting a PC to a home theater system. It's not as easy as it sounds. For example, while many sound cards on the market can pass Dolby Digital and DTS "raw" signals for decoding by the receiver, most EAX/A3D surround games are only able to be output via the sound card's analogue outputs. Dolby Digital and DTS have both offered solutions to allow for a real-time, digital 5.1 encoded signal from a PC to be made to your home theater system.

The DTS-610 product from Creative digitally connects your Media Center or standard PC's audio to a home theater receiver via DTS Interactive technology. This is a real-tim encoding system that takes analogue 5.1 output from your sound card and converts it to a standard DTS signal. It is currently the only way to listen to DRM music from your PC to your home theater system with a digital connection (though it of course goes through an additional digital-to-analogue and analogue-to-digital conversion.

Using the DTS-610 allows the DTS Interactive encoder to turn any PC game (typically using EAX surround) into an interactive DTS gaming experience. Excepting Dolby Digital LIVE, previously, the only way to get rich 5.1 surround out of PC games was to run 6 analogue cables into the 5.1 multi-channel inputs of a home theater receiver. The main problem with this was the fact that most receivers only have one set of multi-channel inputs and many times those are occupied with the 5.1 outputs of universal DVD players for support of SACD and DVD-Audio.

The DTS Interactive-enabled DTS-610 supports interactive real time, discrete multi-channel interactive DTS encoding up to 5.1 channels. Because the unit is external and not a purely digital technology product, the DTS-610 has a potentially distracting latency of < 50ms which could interfere with A/V sync. The output of the DTS-610 is a fully-compatible DTS bitstream which can be decoded by most modern A/V receivers. The unit has two operational modes which are selectable via a pushbutton on the front panel. The frst mode is Encode, which takes 5.1 analogue input and converts it into a DTS-compatible bitstream. The second is Bypass, which merely passes through digital input for PCM or compressed audio formats.

Currently, there are no sound cards or motherboards with DTS Interactive technology. This means that a full D-A/A-D conversion must be made through an external device (like the DTS-610) which results in a high potential for latency (up to 50ms) as well as unneccessary analogue-realm conversion. The advantage, of course, is that an external device like the DTS-610 will take any multi-channel analogue input - so this device could be used for converting a multi-channel SACD or DVD-Audio source into a DTS-compatible stream, not just an EAX/A3D game. While promising, DTS does not appear to be getting as entrenched into new sound cards and motherboards as is its competition. 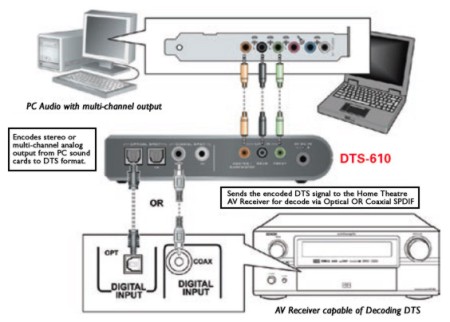 For more infomation on the DTS-610 or DTS Interactive, please visit Creative's www.SoundBlaster.com website or www.DTS.com.