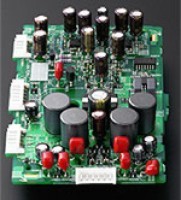 Just today I read on an internet forum a post by a "hot" new manufacturer of class D amplifiers saying that "the only way to solve the interference problem is to put the amplifier in a completely sealed metal enclosure". Apparently they were trying to excuse the fact that their product renders any nearby tuners useless. This begs the question: why didn't they do so then? Answer: because it doesn't help. Of all the electromagnetic emissions produced by switching power amplifiers and supplies, hardly any are radiated directly off the circuit board. Let's get this straight. The wavelength of FM-band signals is 3 meters. Switching amplifiers are notably more compact than that. In order to be capable of radiating appreciably in the FM band, it'll need a little help, and this comes in the form of attached cables.

Enclosing a source of interference without taking further measures against high frequencies getting out of the box through the front door is a complete waste of effort.

Assessing how a device will behave in terms of this interference called "conducted emissions" involves little more than looking at the signal present on the wires attached to it. For qualitative assessment, an oscilloscope goes a long way.

In a switching audio amplifier, the output signal is a low-pass filtered version of the high-powered PWM voltage produced by a switching power stage. The bottom 20kHz of the signal spectrum is the audio signal. The high-frequency portion usually starts at a few 100kHz and consists of the switching frequency along with its harmonics and sidebands. These high-frequency components are a necessary by-product of trying to amplify a continuously variable signal using only two voltages. They need to be removed afterwards because it's only the audio we are interested in. A switching audio amplifier invariably ends in a passive LC filter intended to do just that.

Unfortunately, there's no filter that can totally block parts of the spectrum. Only attenuation is possible. So, the output signal is necessarily accompanied by some remnants of the unwanted high-frequency content of the PWM signal. These remnants are called the residual.

Practical coils and capacitors such as those used in the output filter have an annoying property. Coils have an internal winding capacitance, which appears in parallel with the coil, and capacitors exhibit a series inductance.

For lowish frequencies (say below 10MHz for practical component values and sizes), the coil's rated inductance and the capacitor's rated capacitance proper dominate the equation, and in this frequency range the measured response of the filter tracks the theoretical response very closely. At frequencies well above this range, however, the coil's parallel capacitance will become dominant and further up the capacitor's series inductance will take over too. But wait a minute! This means that at high frequencies the filter becomes a CL high pass filter! Indeed, some not-so-well-designed class D output filters have virtually no attenuation in the 100MHz range.

A look at the output signal clearly shows this. Oscilloscope pictures from typical class D amplifiers (see below) shows a near-sine wave, which is the attenuated fundamental of the switching frequency, with short bursts of HF near the zero crossings. These bursts occur when the power stage switches from one state to the other. This happens rapidly, and the high frequencies generated by this process aren't attenuated very well. Because of this, it makes sense to look at the problem in terms of low and high frequencies separately.

The most common class D output filter is a second order filter. A cut-off frequency of around 30kHz should suffice to cover the audio range with a comfortable margin, but one finds many implementations where it is set at 80kHz or higher. This is done because near the cut-off frequency, the filter response becomes extremely sensitive to the load impedance and you don't want that happening inside the audio band. The problem is readily solved using feedback error control. Many designers opt to forgo this solution either because they lack the math skills to design a feedback loop closing around the filter or because they hold an ideological grudge against any form of feedback (one is tempted to believe the latter follows on from the former). Digitally controlled switching amplifiers (e.g. TI, Pulsus, Apogee, S-Master etc.) are devoid of error control as a matter of course.

(Another reason why digitally controlled open loop amplifiers are so common is that many manufacturers believe the consumer public doesn't care one yip about performance. When performance is truly not an issue, these amplifiers are the cheapest way of getting a recognisable signal into a loudspeaker)

A very obvious consequence of this policy is that the switching frequency gets attenuated commensurately less. A 12dB/oct filter cutting off at 35kHz will provide 40dB of attenuation at the typical switching frequency of 350kHz, but if the filter is set to 80kHz, there's less than 26dB of attenuation. The 350kHz fundamental will appear over 5 times larger in such a design.

The next harmonic of the switching frequency is the 3rd. In a square-wave signal, the 3rd harmonic is already 9.5dB down from the fundamental and the filter will further attenuate it another 19dB so after the filter, it's 28.5dB down from the fundamental. In an ideal world, the oscilloscope graph of the switching residual looks very nearly like a sine wave.

To quote some practical numbers, a 100W/8ohm amplifier with a switching rate of 350kHz and a 2nd order filter cutting off at 35kHz produces a residual of 360mV RMS. The same amplifier with its filter set to cut off at 80kHz produces 1.9Vrms worth of residual. This usually triggers the same three questions.

Question 1: Will it damage my tweeters?

Although this talk is about EMI, this is the first thing people ask when they see the residual on a scope, so I might just as well answer it:

No. We'll follow the above example from the worst case example quoted above: 350kHz and 1.9Vrms. At this frequency an 8-ohm tweeter has an impedance more like 30 ohms, most of which inductive. 1.9V into 30 ohms translates into 63mA RMS. Dissipation happens only in the resistive part of the impedance. For an 8 ohm tweeter this is around 6 ohms, so 6ohms*(63mA)^2=24 milliwatts. This is not enough to fry a fly, let alone a tweeter.

Question 2: Will it cause audible intermodulation artifacts?

Answer: No and no. No, because feeding a loudspeaker frequencies above its acoustic range produces immeasurably low intermodulation artefacts. The diaphragm has to move in order for non-linear effects to play out. No, because you need two to tango, and the only signals around for the carrier to intermodulate with are its sidebands. It follows that any intermodulation effects would coincide with the harmonic distortion components caused by normal distortion mechanisms, which are sure to dominate over any hypothetical speaker-bound carrier demodulation.

Question 3: Will it radiate from my speaker cables?

Answer: Depends. Cables make good antennae inasmuch as their length is comparable to a quarter of the wavelength of the RF signal. A 350kHz carrier has a wavelength of 857 meters (2800ft.). A 5 meter speaker cable will not make an efficient antenna at this frequency. What this means is you're not going to get the FCC on your doorstep to complain about illicit transmissions in the AM band. This does not guarantee your own AM reception won't be compromised, but the neighbours' is OK.